Peer Team
Educator/Trainer
Colonel Eduardo A. Suarez was born and raised San Jose, California. As former Olympian (alternate 1988) he was recruited and entered the active duty Army in January 1989 where he completed basic training and Infantry Advanced Individual Training at Fort Benning, Georgia. In April 1989, he was assigned to the United States Army Marksmanship Unit at Fort Benning as a member of the International Pistol Team. During his assignment he distinguished himself earning medals in national and international competition. In September 1993 Colonel Suarez moved to Minnesota and enlisted in the Minnesota Army National Guard.

Since commissioning in 1996 Colonel Suarez has served at the company, battalion and brigade levels. He has deployed three times. Once in support of Stabilization Force 14 in Bosnia Herzegovina, where he served nine months as the Administration Officer. Second, while serving as commander of C Company, 2-136th Infantry where he served 22 months in support of Operation Iraqi Freedom from 2005 to 2007. Lastly, in 2011 he served 12 months as the Operations Officer for 1st Battalion, 194th Armor Regiment in support of Operation New Dawn in Kuwait and Iraq. In 2008 Colonel Suarez entered the Active Guard Reserve program where he has severed in numerous full time positions. In 2008, while assigned to the Deployment Cycle Support (DCS) Division he coordinated training and assistance for thousands of deploying and redeploying service members and their families. From 2010 to 2017 he completed numerous assignments at the battalion, brigade and state headquarters levels. Most recently he completed command of the Recruiting and Retention Battalion where he was responsible for the recruitment of over 4,500 Soldiers. Since June 2020, Colonel Suarez serves as the Director of Diversity & Inclusion for the Minnesota National Guard where he is responsible for shaping a diverse and inclusive culture for 13,000 Soldiers and Airmen.

Over the course of his career and through his diverse experiences and personal hardships, Colonel Suarez has been an outspoken supporter and advocate for the overall wellness of service members and their families. Colonel Suarez has been invited to speak on numerous occasions in Florida and New York. He has shared his personal perspective on the programs, services and support networks available in Minnesota and the role that servant leadership plays in ensuring our service members come all the way home.

Colonel Suarez is currently enrolled in the U.S. Army War College and holds a Bachelor’s of Science in Architecture from the University of Minnesota and Masters of Science in Administration from Central Michigan University.

Colonel Suarez is married to the former Jennifer Mary Thier, of Dyersville, Iowa since 1989. The Suarez’s have two children: Antonio Louis (21) and currently serving in the MN Army National Guard, and Maria Beatrice (18) who is senior at Hopkins High School. 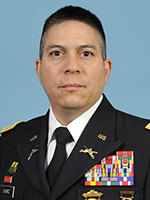