Jeannie Kelly retired from the New York City Police Department in February 2005 after 24 -years of service. She currently works as the Director of 9/11 Outreach and Education assisting 9/11 first responders and their families. She formerly worked as an Outreach and Education Coordinator for the World Trade Center at the Mount Sinai Selikoff Centers for Occupational Health in New York City for ten years.

She attends meetings with World Trade Center Clinical Care Centers, Stakeholders, and labor unions, in regards to the implementation of criteria for eligible enrollees.

She also plans and schedules events, assists in developing new concepts for outreach, and facilitates support for 9/11responders with all aspects of the World Trade Center Health Program.

As a police officer with the New York City Police Department, she was a first responder on September 11, 2001 and continued to work at Ground Zero until March 2002. During her career as a law enforcement officer with the NYPD she worked in various assignments including Auto Crime, Vice, Anti-Crime, and Dignitary Protection.

She was also a Tactics Instructor with INTAC Specialized Training Unit and conducted training at various locations throughout New York City. In March 2002, she then became instrumental in developing, instructing, and mentoring the Chemical, Biological, Radiological Awareness(COBRA) training, the proper use of Personal Protective Equipment, and Counterterrorism training to over 25,000 NYPD officers, Federal and State agencies, and the private sector.

In addition to training, she has participated in the planning, mitigating, and coordinated response of major national and international events including the United States General Assembly, Papal visits, the Republican and Democratic National Conventions, the Presidential Inauguration in Washington, D.C., the World Series, and the U.S. Tennis Open.

She retired after twenty-four years of service from the NYPD in 2005 and immediately signed on as a sub-contractor/instructor with FEMA/DHS at the Center of Domestic Preparedness in Anniston, Alabama and was assigned to the Mobile Training Team in the
central and eastern regions of the United States. Her primary responsibility as an instructor was developing and implementing diversified training for such subject matter as Weapons of Mass Destruction, Improvised Explosive Device Detection, Counterterrorism for Law Enforcement, Hazmat Technician, Respiratory Protection, and all aspects of the
Incident Command System.

She delivered Mobile Team Training to our nation’s first responders, the United States military, federal and state agencies as well as the private sector and volunteer organizations. 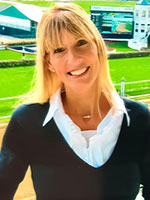