Futures Recovery Healthcare recognizes and would like to thank Janice McCarthy for her great passion and dedication for helping police officers and those affected by police suicide.

Janice served as a routine training officer for the FBI along with other Federal, State, and local municipalities. Her training with Catch a Falling Star’s “Dream Team” along with her non-profit organization, Concerns of Police Suicide Survivors, internationally provided revolutionary resources, education, and awareness for law enforcement stress, critical incident stress, the importance of peer support, and suicide prevention.

Janice McCarthy’s husband, Paul, died from suicide in July of 2006. Paul had been a well-respected Massachusetts State Police Captain. During his 21 year career, he suffered three serious line of duty accidents, which proved to be the etiology of his PTSD.

Paul’s death spurred Janice to commit herself to the cause of PTSD recognition and suicide prevention in law enforcement. Her passion was rooted in helping surviving families find the strength to reconcile the guilt so many suicide survivors experience. She drew upon her personal experience as a cop’s wife and also as a cop’s widow to connect with officers. She knew the law enforcement life and had been openly accepted by those to whom she had spoken.

In her training of officers, Janice used Paul’s story to illustrate the need for all officers to reach out for mental health assistance without fear of repercussion. She called for an end to the age-old stigma of asking for help. She clearly articulated how the “good old boy – suck it up” mentality was instrumental in fueling her husbands’ deterioration.

She had spoken nationally before thousands, telling her family’s personal story in an attempt to reach officers on an emotional level. She appealed to officers as a cops’ wife and widow, hoping that they might understand and appreciate their spouses’ sacrifices. She spoke candidly and emotionally of her children’s pain, hoping the officers might see their own kids in the images of Paul, Shannon, and Christopher McCarthy. And she recounted witnessing firsthand her husband’s struggles, hoping the officers might associate themselves with Paul and realize the consequences of not reaching out for help when they need it.

Her experience as a lecturer had included weekly recruit and officer in-service trainings, Employee Assistance Conferences, Peer Support Conferences, Internal Affairs Investigators, FBI Agents, University Police Chiefs and Correctional Officers. She had also been a guest speaker at the In Harm’s Way and American Association of Suicidology Conferences. Most recently she had worked with the Samaritans of Merrimack Valley constructing and facilitating suicide prevention training for Middle Age Men.

Janice was a board member of Badge of Life, a nonprofit organization which promotes psychological survival for first responders. She was a recipient of The Commendable Service Award from the City of New Haven Connecticut and the Departmental Award of Education from the New Haven Connecticut Police Department for her devotion to the cause of suicide prevention and PTSD awareness in law enforcement.

She was the founder of C.O.P.S.S. (Care Of Police Suicide Survivors), which is a nonprofit foundation formed in her husband’s memory and dedicated to their children Christopher, Paul and Shannon. The foundation provides Care and Support for law enforcement suicide survivors and suicide prevention training for law enforcement.

In addition to her training and nonprofit work, she had authored several short papers on “Policework, PTSD and its Aftermath”. She had worked with legislators in Massachusetts to mandate Suicide Prevention Training for First Responders in the state. She considered her greatest achievement to be her three children, whose strength and love fueled her. 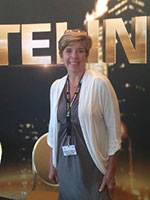